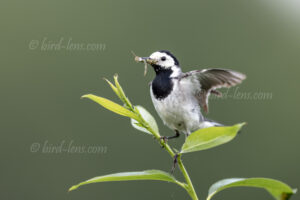 With a thick package in its beak consisting of small Diptera such as Flies (Brachycera) and Mosquitoes (Nematocera), Caddisflies (Trichoptera) and small Dragonflies (Odonata), a White Wagtail, (Motacilla alba) suddenly sits in the pollarded willow just in front of the bird observation tower. As in previous years, a pair of White Wagtails has built a nest in the top of the observation tower and has already had the first young, which are to be fed as nestlings. First come the male White Wagtail, which differs from the female by the more sharply defined black of the nape.

The food for the young White Wagtails in the nest consists of insects on all approaches, mainly small Diptera and also one or the other dragonfly, which can be easily swallowed. The sheer mass of food that is captured during a foray and then also transported is particularly impressive.

While the Barn Swallows (Hirundo rustica), which also breed in the tower, did not pay much attention to the (temporary) fellow visitors of their breeding site and kept flying in with food and nesting material, the White Wagtails were much more reserved, they didn’t even dare the whole time to go into the tower to feed the young. After first the male and then the female had waited patiently in front of the bird observation tower for the ornithologist to disappear, first one and then the other partner flew away again. Only to find themselves a few minutes later on the same branch tip – and sometimes also on the same leaf. I wanted to photograph this approach. There is also a “making of” to show this with a Canon R5. Finally I moved away so as not to keep the Wagtails from handing over the food any longer.

Not only White Wagtails, but many other good birds, as the Sedge Warbler (Acrocephalus schoenobaenus), Bearded Tits or Bearded Reedlings (Panurus biarmicus) and Bluethroat (Luscinia svecica) can be spotted in the ponds south of Stangenhagen near Trebbin in southern Brandenburg. The area is part of the Nature Park “Lowlands of Nuthe and Nieplitz”. The small rivers Nuthe and Nieplitz are located south-west of Berlin and form a unique lowland habitat.