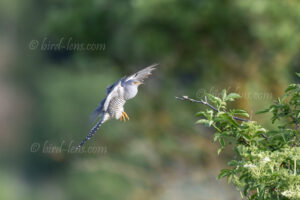 I spot the bird in an Ash tree (Fraxinus excelsior) along a drainage canal. The Common Cuckoo (Cuculus canorus) sits high in the tree and calls, dropping its wings slightly and wagging its tail. It doesn’t keep him waiting for long. The competitors dispute his territory. A little later the next control room is flown to. The Common Cuckoo beautifully shows its gray wings and tail feathers, which with white tips provide the necessary imposing impression. Here the Common Cuckoo flies to its favorite spot, an Elderberry bush (Sambucus nigra). If you hear the unmistakable two-syllable call of the Common Cuckoo on a sunny morning in early May, then spring is finally here. He repeats his name long and steadily as I walk to the hide at the edge of a reed bed. It is the male’s territorial song, with which our Common Cuckoo loudly reminds itself every spring. From the full-sounding “kuck-uck” the first syllable is called with a slightly open beak, the second, longer one with a closed beak.

It is not always easy to see the caller. With the binoculars I can see the blue-grey upper side and the black and white banded underside. The head appears small, the black beak is thin and pointed. Feet and eyes are yellow. Then the turtledove-sized bird with the strikingly long tail starts. In flight, it resembles a sparrow hawk, from which it differs, however, in the pointed wings that mostly move below the horizontal and in the low flight with rapid wing beats.

Observations show that the Common Cuckoo does not really live or call out of the forest – as in the nursery rhyme – but prefers wet areas, heaths, moors, marshes, forest edges, clearings, bush land, coastal dunes, mountains and all open landscapes up to cultivated land interspersed with trees and bushes . While acting flexible, Common Cuckoos appreciate high abundances of potential host birds, which they are also good at spying on in an open landscape.

The coloring of the Common Cuckoo is variable. While males are gray and banded, females have a rusty brown coating on the chest and rump. There are also some dark red-brown Common Cuckoos. Young birds often wear gray, occasionally reddish-brown plumage. Their white nape patch and white wingtips give them a mottled appearance.

To meet the growing demand for top-of-the-line images of the rarer Palaearctic species, Bird-lens.com strives to expand the range of images of Western Palaearctic birds. Trips to near and far locations to take pictures of rare birds of the western Palearctic have been very successful. This blog slip image is just a first impression of what you can find in the gallery in the “Picture Shop” very soon. Please leave a message if bird-lens.com can provide a picture.