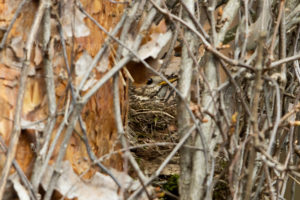 The Song Thrush (Turdus philomelos) is a secret species. After a cold winter, the birds distinctive rather melancholy singing can be heard at some point. At first cautious, its songs and calls sounds a little later high from the treetops of many forests. This is also the case in the pine forests of Brandenburg. In the first few days of April a song thrush suddenly appeared on a transversely hanging branch right in front of me at the edge of a wood. The beak was filled with black „souvenirs“. At first I thought of nestling food. Then I saw the song thrush disappear into a still bare thicket of wild grapevine that climbed a thick pine trunk. I patiently search the tree trunk with the binoculars. If you knew where it was, the nest was easy to see, even if it was partially shielded by old leaves and twigs. There the song thrush sat in the nest, the thick eyes with the bright eye ring were best to see. The approximation to about 10 meters was not well appreciated, so that the shy thrush disappeared a little later.

In order not to worry the shy and cautious Song Thrush, I decided to use the telephoto potential of the EOS 1 DX Mark III again. I have already described the basic procedure several times, e.g. in the blog about the use of the Wireless File Transmitter WFT-E9 on the Canon EOS 1DX Mark III. So I put the Canon EOS-1DX Mark III with the Canon lens EF 600 / 4.0 L IS II USM on a Gitzo tripod GT3542 XLS Systematic with a Burzyzinski spherical head. The advantage of the Gitzo GT3542 XLS Systematic is that it can be pulled out up to 180 cm. This enabled me to significantly reduce the angle to the nest, which was set up at a height of about 4 meters. Now the control via the Wireless File Transmitter WFT-E9 with the use of the camera as a hotspot was activated, the contact with the laptop was established and I was able to follow what was happening on and in the nest with the control software EOS Utility.

I moved away behind the garden wall and a little while ago I could see the song thrush again on or in the nest. She was extremely active, turning now and then. Then again she put her beak on the edge of the nest directly towards the camera. Then she got up again and waved her wings. I had probably not yet discovered any breeding events. Rather, the Song Thrush was busy building the nest. A nice experience that I was able to observe beautifully over a period of about 2 hours without disturbing the Song Thrush in the least.

In order to be able to satisfy the growing demand for top shots of the rarer species of the Palearctic, bird-lens.com explored the home ground and has made targeted trips to the most beautiful natural landscapes of the world. This was done to be able to take excellent photos of the birds of the Western Palearctic. The yield of pictures of rare Western Palearctic birds is very good. The nice picture you see in the blog is only a first impression, what you will find very soon behind the “Picture Shop” tab. Just let bird-lens.com know if you need a picture of a bird species before new pictures are online