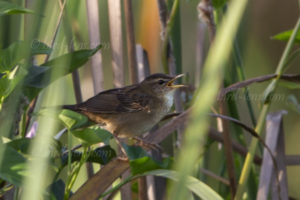 The morning light is fantastic this morning in southern Sri Lanka very close to the famous Bundala National Park. After we have already been very successful with some water birds, we now want to dedicate ourselves to a wintering bird from Central Asia. I was just able to photograph a female Common Kingfisher (Alcedo atthis) of the subspecies taprobana on a tree stump in the back light.

Then it goes to an extensive wetland, which is still in the entrance area to the famous national park. In the reed area there are many bulrushes, some water hyacinths and other plants that tolerate high water level. The Pallas’s Grasshopper-Warbler (Locustella certhiola) is said to roam here in winter. The old reed beds are so densely grown and so similar in color that a small, brown bird would hardly be noticed. In addition, you do not stand directly in front of the reed belt, as the vegetation is preceded by a wide, muddy strip of shore with open water. So you only have one chance to identify the Pallas’s Grasshopper-Warbler based on its voice. And lo and behold: the English Pallas’s Grasshopper-Warbler or Rusty-rumped Warbler – as it is called in some field guides – can be heard promptly and can then be lured out. The bird makes extensive use of the lower areas of the reed area and likes to roam on the bent cattails of the previous year. I can take beautiful photos of Pallas’s Grasshopper-Warbler – even if from a distance.

It is probably the subspecies Locustella certhiola centralasiae, which occurs from eastern Kazakhstan and Kyrgyzstan, especially in the Tien Shan mountains and can be found in its non-breeding area which stretches from India as far east as Myanmar. It is probably the same subspecies that I had already seen and photographed in Kyrgyzstan at the shore of the Issy-Kul lake. The habitat in the breeding area is characterized by tall grass on river banks, valley meadows, and willow thickets and reeds along the edges of lakes. However, it can also occur in quite dry habitats. The bird even climbs up to 1,900 m above sea level on alpine meadows and mountain moors; however only in Siberia in the extreme northeast. In winter quarters the bird often uses swamps, reed edges, flooded meadows and rice fields as habitats. This can be seen here at Bundala-NP.