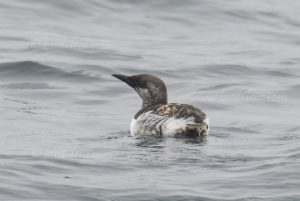 Alcids are a very diverse family; six species of which are found in European waters. The variety of forms of the alke ranges from the small Dovekie (Alle alle) to the extinct Great Auk (Alca impennis). Whithin the family there are types of “normal” awl-shaped beaks up to the puffin (Fratercula arctica) – shaped bills. Auks usually breed in large colonies, on rocky coasts, in crevices or on ledges in steep walls, but also in forests near the coast, in self-dug nesting holes in the ground, on trees or under thorn bushes. Germany’s only breeding ground for alcids is on Heligoland. The Common Murre (Uria aalge) is the most common auk on its bird cliffs. A pair of Common Murre only has one egg, which is pear-shaped, so that in an unguarded moment it may roll in a circle but not fall off the cliff.

The little ship had just cast off from the quay and was chugging through the harbor basin, on which a thin film of oil had formed. Actually, I was on my way out to Cornell Bank in the Pacific, about 20-30 km west of the coast of California. But then the eye fell on an old friend from Europe. It was a Common Murre that swam quietly in the harbor water. I hadn’t recognized them as such right away. The very unsightly, dingy plumage was possibly caused by pollution with marine diesel. Affected birds clean themselves intensively and also absorb the oil internally. Weakened, they seek shelter in the harbor, where they often perish.

Like the Common Murre, the closely related Thick-billed Murre (Uria lomvia) in its splendid breeding plumage has sharply defined black and white colored plumage. In particular, the entire head including the throat and neck are black. In the plainer non-breeding plumage, both species have a white throat and underside of the neck. The white stripe on the beak corner of the Thick-billed Murre is only indistinctly recognizable in the plain dress and may be difficult to see. The most important distinguishing feature in the non-breeding plumage is whether the back of the head is white or black. In the Common Murre, a black stripe runs from the eye towards the neck. The Thick-billed is completely black behind the eye.

Like all alcid birds, the Common Murre has an elongated body, the birds appear a bit chubby and rather barrel-shaped. Common Murre flap their wings quickly when migrating along the coast and sometimes make abrupt changes of direction. Apart from the agile maneuvers, the flight is straight and corresponds to what you are used to from auks. Again and again they pass by the dozen – often in a V-shape – at some distance from the mainland.

In order to be able to satisfy the growing demand for top shots of the rarer species of the Palearctic, bird-lens.com has made targeted trips to the most beautiful natural landscapes of the world. This was done to be able to take excellent photos of the birds of the Western Palearctic. The yield of pictures of rare Western Palearctic birds is very good. The nice picture you see in the blog is only a first impression, what you will find very soon behind the “Picture Shop” tab. Just let bird-lens.com know if you need a picture of a bird species before new pictures are online