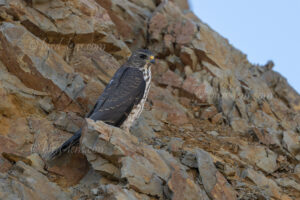 On a ledge just above the road south of Erzurum sits a dark-looking raptor with heavily striped underside. The iris is dark. Very beautiful. Is that the bird, I had seen circling and identified as a Eurasian Sparrowhawk (Accipiter nisus) earlier? The sitting posture is more a reminiscent of a powerful falcon. No, that’s a Levant Sparrowhawk (Accipiter brevipes). And obviously an immature individual. Young Levant Sparrowhawks are dark brown on top and densely striped on the underside. They have a dark stripe on the throat, the so-called gular stripe – as in the female, but more pronounced. In adult individuals the iris is dark red-brown while in juveniles it is said to be dark yellow-grey. I don’t know how “dark yellow-grey” is supposed to look compared to “dark reddish brown”. For me, the bird has clearly dark eyes. However, if you crank up the Exposure slider in Lightroom, you can actually see that the bird has an amber iris. At first the bird sits relaxed, upright on a ledge, despite the car standing a few meters besides it. Then the bird ducks and defecates in a high arc behind it. It can’t get out of the crouched position, because a little later he has also gained momentum from the perch with wings raised high and flies away with a deep flap of its wings. The first two photos from the departure are still very good. But then I quickly lose focus on it, even though I can take a burst of a total of 17 photos of the take-off.

After the young, possibly male Northern Goshawk (Accipiter gentilis) in the late morning, I can now photograph another Accipiter-raptor very nicely along the well-developed road in the mountains of eastern Anatolia.

Actually we were looking for ruins of Küçük Palandöken Tabya and Büyük Palandöken Tabya. But somehow the road kept going up without any sign. Eventually we end up at Palandöken Gecidi, which is over 2,800 m above sea level. The trip goes on a very well developed, winding, steep route through a beautiful landscape. A trip to the barren mountains around Erzurum is definitely worth it.