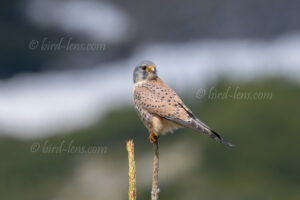 A hovering Eurasian Kestrel (Falco tinnunculus) is a frequent sight over the open, higher reaches of the alpine meadows of Durmitor National Park. Above 1,600 m above sea level, it can look for its prey in the open landscape.

Here, too, it is probably primarily Voles (Microtus agrestis) that can account for up to 90% of its food in Europe. It is remarkable that, according to the latest scientific findings, Eurasian Kestrels have special sensors in their retina with which they can perceive ultraviolet light. Voles mark their holes with urine and feces that are visible in ultraviolet light. Fresh mouse urine reflects light of this wavelength particularly well. Voles like to mark their territory with their own urine. It has been shown that Eurasian Kestrels flying over an area can see and evaluate vole scent marks to the extent that they can determine vole numbers and population densities. This ability would allow Kestrels to survey large areas from the air in a relatively short period of time. This may explain how Eurasian Kestrels – and perhaps other birds of prey as well – can identify and exploit areas of high Vole density without much local knowledge and prior experience of the local food resources. Contrary to popular belief, the beak is arguably used to damage the central nervous system of rodent prey, thereby reducing prey movement, rather than killing the prey directly. Killing is done by walking through the prey with the claws and thus mainly by suffocation and probably also stabbing.

Anyway, with its skills, the Kestrel can quickly scan a meadow and locate the spots with the highest concentration of Voles. There he stands shaking in the air and waits for the next mouse to crawl out of its hole before he pounces on the vole.

The Eurasian Kestrel of the image of the blog is probably a young male. In fact, Kestrels show a pronounced sexual dimorphism in their plumage. The most noticeable distinguishing feature between is the head coloration. Males have gray heads while females are uniformly reddish brown. Both sexes also have a beard stripe. This is black in males and brown in females. The fact that the Eurasian Kestrel shown has the typical reddish-brown back with small black, diamond-shaped spots, but rather a dull gray beard stripe, could indicate that this individual is not yet fully grown.

Many hikers and birders come to Durmitor National Park, the most famous ski resort in Montenegro, because of the forests. Especially along the Mlinski Potok you can hike along a very beautiful and natural mountain stream. Spruces (Picea abies) and Silver Firs (Abies alba) can be found here in very impressive numbers and in good natural condition. The picturesque area around Lake Zminje, the Snake Lake, is also well known. North of the lake it then goes into a strict forest reserve, the Crna poda. Here the trees are said to be over 400 years old and over 50 m high. Black Pines (Pinus nigra) and Balkan Beeches (Fagus moesiaca) are dominant here.

But above the tree line, the Durmitor National Park is also very productive in terms of birds. The landscape is simply breathtaking. The views of the surrounding mountain ranges are fantastic. There is a “Jeep Trail”. This is a great, moderately winding trail. Also known as the “Durmitor Ring”. A 75 km circular route circles the Durmitor mountain range past stunning cliffs, snow-capped mountains, alpine meadows and gorges. First we drive all alone through the area; but then the traffic increases – sometimes even with mobile homes. A height of 1,700 m above sea level is quickly reached. From here it goes much higher up. The vastness and this silence: a real dream. The road or track goes up to 2,100 m above sea level and then descends again, plunging into a good spruce/fir forest. Coming from Žabljak, the beginning in the scattered village named Bosača is very productive and recommended.