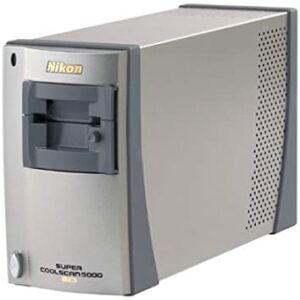 The problem with both, however, was that Nikon discontinued support a long time ago. My old Nikon COOL SCAN IV ED only worked under Windows 98 and was therefore out of service for quite a while. From time to time I attached an old desktop with Windows 98 but had to quit due to problems in communication with my home server.

And up to today, the scanners cannot be easily operated under Windows 10 – 64 bit. Nikon does not support this operating system, therefore the installation of the scanners requires a few tricks, which are relatively easy to master for software mechanics, but which might be too much for most amateurs. It goes without saying that you need administrator rights to perform the installation.

Thanks to a specially purchased driver software called VueScan, both Nikon film scanners are now functional again and work better than ever. VueScan is both efficient and easy to use. VueScan is an alternative scanner software for various flatbed and film scanners. The software reportedly supports a total of over 5,600 scanner types, making it possible to digitize not only slides but also documents and photos. My Nikon scanner now works almost perfect. The pitfalls, I tell later in this blog.

I bought the Professional version (77,50 Euro), because I wanted the full functionality. In the Standard version (around 34 Euro) it is not possible to create Raw scan files. Also, ICC profiles and color spaces become possible in the Pro version.

Scanning film strips works very well and is fast as well. But also here are some settings to heed, but probably with the last updates – these come almost in 2-weekly rhythm – less annoying. What is a bit annoying is that the scan crop from time to time makes itself independent and then itself looks for hard edges, which seems to show it the frame of the slide crop. So you have to have to improvise and be patient sometimes.

Furthermore, with images that show a lot of black, birds in the forest for example, there is the problem that Vuescan picks the beginning of the image – instead of just starting the preview scan x millimeters after the beginning of the image. I fiddled around with the image offset for a while. Not always with success. In fact, it happened more often than not that the correct crop was found with difficulty for the first image, and then the following images were shifted again – to the point of a center bar in the middle of the image. The Internet is also full of complaints about this. It took me a while to find the further down (and usually well hidden) option of Source > Image Alignment. If you enter “slide film” as template, the default version automatically sets “Image orientation” to slide film. But you can also set the image alignment to “Off”. Then Vuescan always sets a certain distance from the beginning of the film and you might find peace for a while. Not so comfortable; but reasonably reliable. Reliable to some extent because Vuescan looks for the beginning of dark pictures – i.e. flash at night – again. But in the meantime it seemed to me that it is usually better to set “Image Alignment” to Off than to set “Image Alignment” to slide film.

I also experimented with the color depth. So with TIFF images you can scan between 24 bit RGB up to 64 bit RGBI. It is understandable that the file size increases immensely with 64 bit RGBI compared to a lower color depth. So it should be worth the 110 MB that 64 bit RGBI means. For post-processing in Photoshop it might be worth it. The differences are however – in my experience not really overwhelming. The 64 bit RGBI scan seems to get a little more out for the editing process, but it’s not much. The scan can’t get out more than the film itself.

To test my experience, e.g. for further processing in Photoshop, I first scanned some slides with 64 bit RGBI, which I had previously scanned with 24 RGB. What surprised at first was that scanning speed is not longer at all. However, a little disillusionment then spread during the processing in Photoshop. The hoped for leeway to be able to better balance the bright areas or to lighten the shadows better could only be confirmed – if at all – in nuances. There is a huge difference between taking a picture in RAW as a digital image and trying to get more out of a slide afterwards. Then there is still the file size.

All in all I can say that scanning film strips with the Nikon film scanner Super CoolScan 5000 ED and with the help of Vuescan is worthwhile. The many thousands of slides of past times would otherwise be invisible and would even be lost at some point due to chemical reactions in the color layers of the slide material.