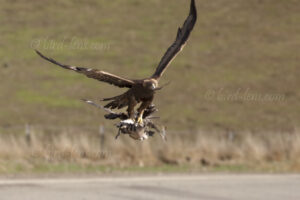 At first it is just a dark spot high in the sky, then I recognize the silhouette of a Golden Eagle (Aquila chrysaetos) against the blue of the sky. A little later I lose sight of the bird. Suddenly I see something flying again. I still wonder what a single Canada Goose (Branta canadensis) is doing in such a dry valley. Suddenly the Golden Eagle is there again and approaches in high speed from behind. A little later the Golden Eagle swoops down on the goose and grabs it. In the clutches of the eagle, the goose cries out in agony with its beak wide open. After the Golden Eagle has transported the Canada goose a short distance in its clutches, it drops it on the asphalt of a road and then pounces on it again. He then drags it rather hopping than flying from the road up to a harvested field. As I follow all this on camera, my breath almost stops. I drive slowly to the stubble field, on which the Golden Eagle has finally dragged the goose. There already the first Ravens (Corvus corax) approach. Unfortunately – for the photographer – the eagle flies away and leaves the bleeding goose behind. When I look again later, she is probably already dead. The whole spectacle seems to attract not only the ravens. Also an adult Red-tailed Hawk (Buteo jamaicensis) of the reddish morph (possibly calurus – subspecies) suddenly appears in the sky and circles a few times over the scenery.

On a beautiful afternoon at the end of October I start at the Pacific coast of California and want to persue the route described in “A Birder’s Guide to Northern California” J. Kemper over the Panoche Road to the east. The route is really a dream. Great farmland, very little traffic, great birds. Among others I see a California Towhee (Pipilo crissalis). The hit is of course that I can photograph the Golden Eagle attacking the Canada Goose. I continue east and practically behind every short can be a surprise. So I quickly see another flock of sparrows. The flock consists of White-crowned Sparrow (Zonotrichia leucophrys) and Lark Sparrow (Chondestes grammacus)  which are sitting side by side on the barbed wire.