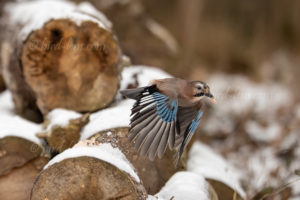 The Eurasian Jay (Garrulus glandarius) is not an ugly, if predominantly brownish, bird while sitting. The combination of size and brownish color in combination with the light blue-black-and-white wing field make the jay largely unmistakable. Normally a Eurasian Jay likes to move forward by jumping on the ground. When the jay does fly, the otherwise brown bird is very colorful. The upper wing pattern is complex, but mainly characterized by smaller, partially covered, white primaries and blue areas with a fine, black border on the secondaries. The blue color is particularly noticeable in flight – as seen in the blog picture at a winter feeding station.

At the beginning of the 20th century, the colorful blue wing feathers of this bird were very popular both as hat decoration and for making “flies” for salmon fishing. For a long time the Eurasian Jay was persecuted by hunters and farmers for its egg theft and nest robbery habits. With the decrease in the intensity of poultry farming since the 1920s, a steady increase in the species can be observed. This accelerated in the 1950s when the creation of larger suburban gardens in cities and city parks offered living habitats that were largely safe from human persecution.

Germany is populated by Eurasian Jays almost everywhere. You can tell that it is not a pronounced migratory bird by its oar-like flight style and wide, round wings. The body is made for brief, skilful flying from tree to tree, rather than for bridging greater distances. Even if the birds prefers forests, it can also be found in the gardens of the villages. Feeding stations are popular in winter. During the breeding season, jays are more secretive. They then often betray themselves through soft singing with many imitations. The Common Buzzard (Buteo buteo) is popularly imitated. Otherwise, Eurasian Jays make themselves heard with loud, rattling calls.