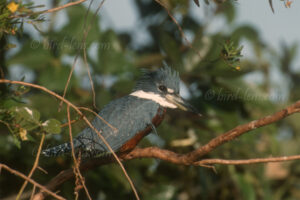 Quietly a Ringed Kingfisher (Megaceryle torquata) stands on a branch above a channel accompanying the track. Slowly I approach with the Landcruiser. The bird, which was scientifically called Ceryle torquata in former times, is however so tense with prey observation, that it does not pay attention to me. So some close-up photos are taken.

The Ringed Kingfisher has a body length of 42 cm and is the largest representative of the “Kingfisher family” in Brazil and the only one with gray-blue head, crown and back. In the male, the breast and belly are rust red in color, while in the female a broad gray-blue horizontal stripe across the breast and the rump in rust red stand out. The bill can reach a length of up to 8 cm. A very common bird in the Pantanal. It is usually seen perched on bushes or quite openly perched on dry tree stumps on the banks of rivers and lagoons. Its size and habit of perching high up in dead trees or other open waiting places make it a conspicuous bird in its range. The patience with which it sometimes remains up to two hours in search of food has impressed many observers The bird feeds on fish and aquatic insects. It kills the larger fish by hitting them with its beak against a hard object, such as a log, before swallowing them whole. It inhabits holes on the sloping river banks, close to the water and can then be observed very nicely in a colony. In some places in the Pantanal one can discover riverbanks with dozens of nesting holes of these birds. In these places you can hear from far away the noise that these animals make while flying around. Except during the breeding season, males and females of this species are solitary and vigorously defend their territories on the shores of lakes or rivers throughout the year. They do this with loud, piercing calls and sometimes aerial chases. Even from long distances, its characteristic flight call can be heard far and wide.

The Ringed Kingfisher has expanded its range from Mexico into the United States over the past 40 years. Although it was first recorded in the U.S. in 1888, the kingfisher’s first nest was not discovered until 1970. The Ringed Kingfisher, which is regularly observed only along the Rio Grande and adjacent waters in south Texas, continues to expand its range and breeding habitat northward in Texas. Populations of the Ringed Kingfisher that migrate northward from Central America share their range with the Belted Kingfisher (Megaceryle alcyon) for 6-8 months.