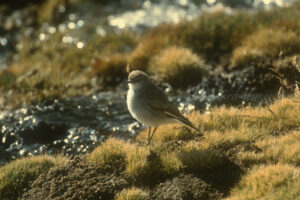 This day is really hard core „expedition“. I do not know how to describe the excursions before, but if expedition means loneliness, vastness, untouched landscape, discovering, then this day is exactly that. After spending the night in Lagunilla de Farallon in a crack of a house and sleeping quite well despite the 4,200m altitude, I leave at 8:00 a.m. Despite directions from people who know the area, which were even quite useful, the way is really not easy to find. With the GPS and the TPC map alone I probably would not have gotten further, at least not in the time. On the beautiful drive through the high-montane mountains, between the snow-covered Cerro Caucani and Cerro Granada, I pass on the hint of a dirt road finally a 4,870m high pass. I must stop nevertheless occasionally, in order to photograph the landscape.

When I see 2 Rufous-bellied Seedsnipes (Attagis gayi) in sparse Puna landscape in the morning light and can photograph from next proximity, the morning is already saved. A Puna Tinamou (Tinamotis pentlandii), a Lesser Rhea (Rhea pennata) and a pair of beautifully positioned Golden-spotted Ground-Doves (Metriopelia aymara) complete, for now, the list. One of the songbirds is a Cordilleran Canastero (Asthenes modesta), which fortunately shows its yellow throat patch and pointed, not-too-long bill in one of the poor images shot. One of the Tyrants, which run and hunt like Wheatears and occur mainly in the high Andes, is to be expected, and this is what I see. First I think of probably ” Cinereous “. Then, on intensive searching in literature, it turns out to be definitely a Puna Ground-Tyrant (Muscisaxicola juninensis) because of the rusty brown tinge on the head, the superciliary stripe and the gray back, and is definitely not the much smaller Spot-billed Ground-Tyrant (Muscisaxicola maculirostris). There are many Ground-Tyrants that winter or breed in Puna habitats. Considering that this species occurs in the high, flatter part of the Andes from southern Peru to northwestern Argentina, a better name would be Altiplano Ground-Tyrant, since it occurs almost exclusively in the zone known as the Altiplano. The Puna Ground-Tyrant is a rather stationary species, one of the few non-migratory species of the genus. The rusty-brown head is conspicuous, but the rust on the head is diffuse and not concentrated in any particular spot. The dorsal coloration is gray-brown, lighter than the White-browed Ground-Tyrant (Muscisaxicola albilora) and darker than the Rufous-naped Ground-Tyrant (Muscisaxicola rufivertex). The species normally occurs above 3500 m NN and has a particular preference for moist depressions or at the interface between moist depressions and drier rocky slopes in the puna.

It is noteworthy that until a general revision by Juan Mazar Barnett, among others, the species appeared only once – in 1908 – as a definite record for Argentina. At that time a specimen was collected at Laguna Colorada by E. Budin. The laguna is located near Maimara, just 100 km north of San Salvador de Jujuy, at about 4.000 m NN. In July 1989 this bird species was definitely discovered on the RN 40 road in Los Cardones National Park, Salta. In September 1994, a Puna Ground-Tyrant was on clay soil with several Cinereous Ground-Tyrant associated at Cerro Negro (4,000 m) in Los Cardones National Park. In August 1996, a pair of Puna Ground-Tyrant was seen foraging on the gravel shore of Laguna Verde, on the road between Santa Ana and Humahuaca at about 4,500 m NN. Bar-winged Cinclodes (Cinclodes fuscus), Cordilleran Canastero, and Red-backed Sierra-Finch (Idiopsar dorsalis or Phrygilus dorsalis) were also found in the vicinity. In September 1997, up to five groups (pairs or single birds) were on RP 7 between La Quiaca (Jujuy) and Santa Victor (Salta). All were above 4,000 m in different microhabitats of the puna. One pair walked in a marshy field that formed an open valley crossed by small streams. Another pair preyed on insects on a landslide of large black rocks in the company of a troop of Southern Viscacha (Lagidium viscacia), also called Chinchillon or Vizcachon in Argentina. Individual Puna Ground-Tyrant were sighted on gentle slopes covered with high-Andean grass in rocky terrain. In most cases, the birds were walking around in search of food. They caught insects in flight or from the ground. The general behavior was generally similar to that of other species of the genus. These observations indicate that the species appears to have been overlooked until millenium in Argentina, perhaps due to confusion problems with the Red-capped Flycatcher. However, the species appears to be quite common in areas with suitable habitat. The Puna Flycatcher is typically – as mentioned – paler and overall grayer with a dull rusty-brown area in the center of the head plate, while the White-browed Ground-Tyrant has a more extensive reddish-brown area on the head plate and a shorter and less conspicuous whitish eyebrow. Either way, a nice addition to what is not a common bird for bird-lens.com.

A little later, I’m passing at Lago Pululos. A real mountain lake. I find some Coots. In addition, a Red-backed Sierra-Finch can be seen very nicely on reddish stone slabs. Then the destination according to the map is reached: Laguna Vilama. I mark a site in the GPS; a potential sleeping place is already found. Then I see the Laguna Vilama – or is it only the lake before? In any case it is an extended salt encrusted pan, which is fed by different streams of the surrounding 5,000m (yes, almost up to 6,000m) high mountains. A fantastic impression.

Bird-lens is first and foremost a website designed to meet the growing demand for high quality photographs of the birds of the Western Palearctic. In order to satisfy the demand for top-quality photographs of rare bird species, Bird-Lens.com has also made targeted trips to distant places such as Asia, Africa and South America. All this in order to be able to take excellent photos of birds. The yield of pictures not only of rare Western Palearctic birds is very good. The beautiful picture of the blog is only a first impression, what you can find in behind the tab “Picture-Shop” (http://www.bird-lens.com/zencardshop/) very soon. Just leave a message if bird-lens.com can serve with a picture.