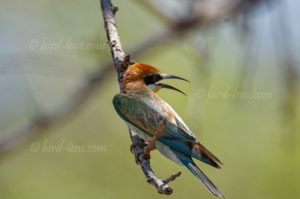 The trip to the Majete Game Reserve makes me stop at a bush. A remarkable bird party can be seen here. After some minutes I can detect Fork-tailed Drongos (Dicrurus adsimilis), Livingstone’s Flycatcher (Erythrocercus livingstonei), Red-capped Robin-Chats (Cossypha natalensis), Bearded Scrub-Robins (Cercotrichas quadrivirgata) and a Holub’s Golden-Weaver (Ploceus xanthops) – with a strikingly flesh-colored beak – and additionally a Grey-headed Bushshrike (Malaconotus blanchoti). On the way back I photograph a female of the Eurasian Golden-Oriole (Oriolus oriolus) in the rising heat. The temperature is only relieved a little by the clear wind.

Finally I have to stop at some acacias. There is movement in the lower trees in a ravine. Colorful birds flying back and forth make me suspect. Hey, these are “our” Bee-eaters. In addition to a Lilac-breasted Roller (Coracias caudata), there is a remarkable flock of European Bee-eaters (Merops apiaster), which obviously use a mass swarming of ants. The beaks of almost all European Bee-eaters are wide open. Either they pant in the heat (which is probably the most likely) or the tightness of the food source promotes stress and thus aggression. The beak lock can express both. I also see a female from the Lesser Masked Weaver (Ploceus intermedius) in all the hustle and bustle. A great way to end the Majete Game Reserve.

The morning had started early. It was 4:30 am when the alarm clock woke me up. At 5:00 am I’m on my way. I pass the unlocked emergency gate at the gate to Lengwe National Park. At the bridge at Chikwawa, Southern Carmine Bee-eater (Merops nubicoides) and White-fronted Bee-eater (Merops bullockoides) should be seen from the bridge can on their breeding holes in the high cliff. There is no need to search the cliff wall. The Bee-eaters – unfortunately only the White-fronted Bee-eaters are present – can be admired in the trees at eye level. This is really a great sighting, which is excellent here from the bridge. The river is quite impressive. Here it flows sluggishly and yet with emphasis on a width that roughly corresponds to the Rhine in the Upper Rhine Valley. Some Common Swifts (Apus apus) also fly over the river. The nest of a African Harrier-Hawk (Polyboroides typus), which has taken up residence directly above the police station, is nice. This is worth a photo for me. The road is initially paved, but is then replaced by a fairly good – at least wide – gravel road. It doesn’t take long before I find the first signs. The junction to the Kapichira waterfalls is found quickly. Here, just before the gate to Majete Game Park, the signposted junction to Kapichira Falls leads to a huge baobab tree. The former Majete Safari Camp is said to have been located here in the past. At least that’s where I park the car. Some huge pebbles, probably made of granite, are not far. It takes a bit of scrambling to climb these large granite blocks and then find the right seat. It takes a while to find the right job. Right from the start, the view is very good in all directions. With a view of the dam, I can see the first birds. There the “standard birds” can also be seen 4 Hamerkops (Scopus umbretta). A Hamerkop can be seen carrying a snake in its beak and then consuming it. A true African dream, although it is rather humid despite the early morning hour – it is 6:00 am. Then after a change with a view directly on the dam I see them: the Rock Pratincole (Glareola nuchalis)! Only 3 individuals of Rock Pratincoles but with the spotting scope they are excellent to see. I sit like this for a while and just enjoy the overview. Then I think about hitting the ESCOM-Power Corporation, whether I can climb into the rocks from the power station and take a closer look at the Rock Pratincoles. Otherwise you are just too far away. No, that’s totally forbidden, I’ll hear later. For that I would have to stick to the headquarters in Blantyre.

The park is a real recommendation. It is significantly more hilly than e.g. Lengwe NP, more river-accompanying, therefore more green vegetation with some woods of Mopane trees. Great, really green savannah – the baobabs have green leaves and already show their white flowers – directly on the wide, fast-flowing Shire River. But the park also has its peculiarities. I hear later that it inhabits not only Hippos (Hippopotamus amphibius) but also Elephants (Loxodonta africana) among. A little later I can see the bird party described above in the bushes.

The wonderful family of Meropidae includes at least 26 beautiful species, of which Africa can boast no fewer than 20 species. Bee-eaters can also be found all over Asia and even as far as Australia. These charismatic, colorful, and elegant birds are popular with bird watchers from experts to beginners and belong to a group of birds whose beauty even non-bird watchers can truly appreciate.

A selection of the most beautiful Bee-Eater-pictures that bird-lens.com took on its trips to the tropics is presented in the “Bee-Eaters of the Word” gallery. In Africa, bee-eater occurs from the southern tip of the continent to the desert-dominated north and occupies an incredible variety of habitats and niches. These range from the interior of the deepest rainforests in the Congo to the dry steppes of the Sahel zone. Both indigenous and migrating or wintering species occur in tropical areas. One advantage of these beautiful birds is that not only are they colorful and energetic, but they’re also relatively easy to spot. At least that is true if you make several visits to Africa and are ready to be in the right place at the right time. For some species, such as the Rosy Bee-eater (Merops malimbicus), the Black-headed Bee-eater (Merops breweri) or Blue-headed or its cleavage Blue-moustached Bee-eater (Merops muelleri) the journey to the destination should prove to be the greatest challenge.