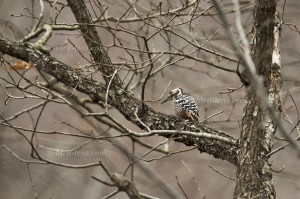 For some time we had fought our way up the hiking trail, interrupted again and again by ankle-deep fields of snow. Then, at about 1,650 m above sea level, a woodpecker squeaking can be clearly heard. That can only be the White-backed Woodpeckers (Dendrocopus leucotos)? I play the calls and the drumming from the tape. And lo and behold: a woodpecker reacts to the calls, which then also comes flying in outraged. But the woodpecker is clinging to a tree trunk very covertly behind branches. I try a few more times, but the results aren’t really impressive. The White-backed Woodpecker stays hidden, although it reacts – reluctantly – several times again. In comparison to sightings in Strandzha Nature Park in southern Bulgaria, observations were poor this time. This might be due to a inadequate time window. Now White-backed Woodpeckers are breeding and do not move so much in their territory and do not react as readily as it is in e.g. end of March/ April.

White-backed Woodpeckers are always high on WP-birdwatcher´s lists. And this time we are in the „Alps“ of Montenegro. In the most beautiful morning sunshine we have walked already through a very well maintained coniferous forest along the Mlinski potok stream. Spruce (Picea abies) and Silver Fir (Abies alba) can be found in very good condition here. We finally arrive a forest road that has just been gravelled. Which then leads to Zminje Lake, the Snake Lake. The forest here is still dominated by conifers. Here we should be north of the lake in a strict forest reserve, the Crna poda. Here the trees are said to be over 400 years old and over 50 m high. I don’t necessarily see or interpret it that way when, after a short rest on a bench in the middle of a snow field, we continue walking and leave the Schlangensee on the left. But the reserve is said to consist mainly of Black Pine (Pinus nigra) and Balkan Beech (Fagus moesiaca).

Available scientific survey data suggests that White-backed Woodpeckers inhabit virtually all beech forest communities in the country. According to current scientific population estimates, Montenegro hosts a significant proportion of the Balkan subspecies lilfordi. Of course, the densitiy of White-backed Woodpecker varies in Montenegro from lower densities of 0.35 – 0.41 BP/10 km² in forests where beech accounts for only a small part of the tree cover to 12.7 – 13 .1 BP/10 km² in areas where mature beech stands predominate, which is particulary the case in the Morača Gorge or in the Bjelasica and Kuči Mountains. Low densities in Montenegro are comparable to those in managed forests in the Western Carpathians, more like those I have seen in Slovakia. The specific occurrence here in the strict forest reserve, Crna poda, does not appear to belong to the top areas. The authors of a scientific study write themselves that the abundances of the White-backed Woodpecker in Montenegro are comparable to the densities in national parks, forest reserves and other protected areas in the Italian and Austrian Alps, the average densities in mixed forests in Montenegro with relatively low proportion of beech or with good but limited occurrence of mature beech forests such as e.g. in Durmitor with 3.5 BP/10 km² and 7.2 BP/10 km² are more in the lower midfield. However, they are still comparable with the abundances in the best areas for the species in Slovenia.

As I mentioned, I had this subspecies of a White-backed Woodpecker already in the Strandzha Nature Park, in southern Bulgaria. This is a reserve up in the hills, just 15 km as the crow flies to the Turkish border. Silkosia is situated 2 kilometers north of Kosti village and 1 kilometer east of Bulgari village. Around 260 species of land plants have been found in the reserve. It conserves the most typical and relict Oriental Beech (Fagus orientalis), which is a deciduous tree highly preferred by this target species, the White-backed Woodpecker (Dendrocopus leucotos lilfordi).

To cope with the growing demand for top shots of the rarer species of the Palearctic Bird-Lens is keen to enrich the range of pictures of birds you can find in the western palearctic. Trips to remote places like this one to capture images of rare birds of western palearctic were very successful. Although the nice image of the blog was shot in Strandzha Nature Park/ Bulgaria, will find in the gallery in the “Pictures Shop” very soon many new images. Just give a message, if bird-lens.com could serve you with an image needed before the new pictures are online.