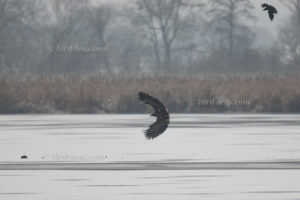 The night was cold, so that a layer of ice had formed on the vast lake. Already 70 percent of the lake area was frozen over. The ice layer was strong enough to carry the White-tailed Eagle (Haliaeetus albicilla). After a few days of snowing, it didn’t get any drier, but it was significantly colder. Temperatures below -5 ° C were possible. A few days later I went on to Lake Blankensee from an excursion to Potsdam.

A morning excursion to the Blankensee not only gave the birder a wonderful water landscape on an impressive winter morning with minus temperatures and fog, but also a remarkable bird-watching of a sea eagle on its icy coot hunt. Obviously the White-tailed Eagle had just captured a Eurasian Coot (Fulica atra) that have run carelessly on the ice. The Eagle immediately tried to leave the ice surface with the coot it had captured, but was attacked by a conspecific as well as some Hooded Crows (Corvus cornix) because of the prey. The struggle dragged on for a while. When the successful White-tailed Eagle had just scared away the Hooded Crows, another hungry White-tailed Eagle came flying in.

The well-developed reed areas of the Blankensee southwest of Berlin are a very good photo area and, among other things, known for the Bearded Tits or Bearded Reedlings (Panurus biarmicus) found in the reeds. A boardwalk affords a very nice view of the lake from the east. The boardwalk can be reached either from the parking lot at the exit of Blankensee in the direction of Schönhagen or from the parking lot in the middle of Blankensee (near Blankensee Castle) on a short walk. It is the only way to observe birds up close on the Blankensee, as the lake is otherwise completely surrounded by wide siltation zones with reed beds and alder break.

Adult female eagles can weigh up to 7 kg, while males remain significantly below that, but still weigh up to 5 kg. So it is no wonder that the imposing birds have a wingspan of up to 2.5 meters. White-tailed Eagles also feed on fish. But also (larger) waterfowl up to the size of a goose are on their menu. Therefore, the imposing birds of prey are most likely to be observed near the water. In winter, when the rivers and their banks are frozen, the eagles sometimes sit right on the ice. Not infrequently to rest, but sometimes also to hunt.