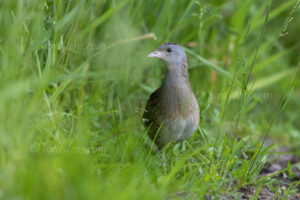 Drops of dew hang on the sloping blades of grass in the wide floodplain of the Warthe in the early morning. It’s summer and the sun rises very early. A fat, red ball has pushed itself over the horizon. But the sun has not yet sent out its rays to banish the last remnants of the night. The perfect hour to find the Corn Crake (Crex crex). Especially in the area in front of the flood protection dike at the mouth of the Warthe there are extensive pastures that have not yet been mowed even now – at the beginning of June. They give shelter and home to the Corn Crake; a perfect habitat for this meadowcracker.

I walk along a paved path that is supposed to lead from the dyke to Weiden nearer the river. Willows (Salix sp.) occasionally line the high meadows and perennials. I do not only hear the calls of the Marsh Warbler (Acrocephalus palustris), the Common Whitethroat (Sylvia communis) and of course the scratchy calls of the male Red-backed Shrike (Lanius collurio). Then I hear the calls of a Corn Crake in the background; clearly. I then mimic the stereotypical, repetitive calls of the Corn Crake. Although I had the impression that the Corn Crake had stayed far in the area before, it didn’t take long before the bird suddenly seemed to be standing right next to me with an impressive volume. Of course, nothing can be seen in the tall grass. The next time, the bird appears to be in a willow thicket right next to the flagstone path.

A camouflage tent is quickly pitched. I put a Bluetooth speaker by the side of the road, right where the tall grass ends, and wait. Although the range of Bluetooth is limited, this is not a problem given the careful but also curious behavior of a Corn Crake. Suddenly – without a twig moving in the willow undergrowth, the bird is there. Although in the shade of the bush, it is still unprotected, practically in the middle of the road. It looks at the whole scene – including me – skeptical but still curious. To do this, it stretches its neck and makes itself very slim. Then it ducks again and runs unhurriedly along the worn edge of the field path until it disappears behind the willow bushes in the grass.

After a few weeks ago an almost endless, wide expanse of water had spread in the national park “Ujście Warty” (Warthe estuary) very close to Kostrzyn (Kuestrin), the water is now clearly on the retreat. Especially on the southern edge of the flood area, a magnificent overview of the spacious landscape opens up. Of course, when the water level is high, the rich bird life is even more spectacular to admire. When the wet meadows are flooded in autumn and spring, the water levels can fluctuate by up to four meters over the course of the year. Now – in summer – the high number can be guessed at. Biodiversity has shifted from large birds to songbirds. Many breed here and use the natural and semi-natural lowland landscape. This also applies to the Corn Crake, which has been extinct in many areas in the west for a long time. Falling groundwater levels and the loss of wet meadows have caused a noticeable collapse in populations, even in formerly good, productive habitats.

The Ujście Warty National Park is one of the younger large protected areas in Poland. It was founded in 2001. Access from Central Europe is easy as the area is on the western border of the country. Küstrin is only 80 kilometers away from Berlin. The Warta flows through the area and transforms the area of ​​around 8,070 hectares into a water meadow landscape before it reaches the Oder as an inland delta near Kostrzyn. Natural arms of the river, numerous backwaters and man-made canals create a paradise for flora and fauna. The landscape changes in all seasons. But it is rich in birds in all seasons. The uniqueness of the bird life and the extensive wet areas prompted the park to be included in international protection regulations. Including the Ramsar Convention, the “Convention Concerning Wetlands, Particularly as Habitats for Waterfowl and Shorebirds, of International Importance.