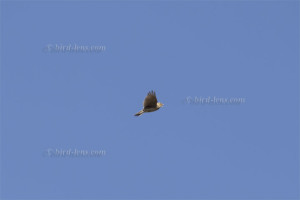 The male Skylark (Alauda arvensis) climbs higher and higher in a steep song flight until it can hardly be seen in the sky anymore, only to then drop to the ground again. Who is interested in ornithology does not know the courtship song that is one of the first to be heard over the bare fields at the end of February? Admittedly, such an experience has become rare in Germany, and since the turn of the millennium the population of what is probably the most classic of all native field and meadow birds has declined by more than a quarter. Although the scientists estimate that there are still between 1.3 and 2 million territories in Germany, regional losses show a clearly negative trend. In Lower Saxony alone, the skylark is declining dramatically. There has been a nearly 90% decline in numbers since the 1960s.

About sparrow-sized (16-18 cm), the inconspicuous brown bird lives well camouflaged on the ground for most of the year. The nest hollow contains two to six brownish spotted eggs, and the number of broods usually reaches two, under favorable circumstances even three per season. The young birds leave the nest within the first one to two weeks after hatching and are initially fed by the parents before they become independent after about a month. Skylarks are resident birds or short-distance migrants and roam in small flocks during the winter months before returning to their territories in February to March. It is to be hoped that this will continue in the future and that the song of the skylark, the main melody in our agricultural landscape, will continue to herald spring.