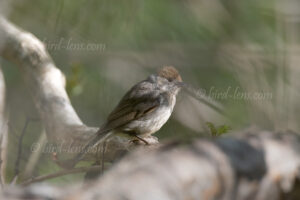 A Blackcap (Sylvia atricapilla), a female recognizable by the rusty-brown crest, suddenly sits on a low branch. It has fine, but long, nesting material in its beak. Despite the short distance to us, it sits irresolutely on the branch with the blackish roots for a while. In fact, the male Blackcap builds several nest beginnings within about two days, similar to the playing nests of the House Wren (Troglodytes troglodytes). It can be observed that it picks up the nesting material from the ground, e.g. from a lawn. From these loose courtship nests, the female selects a brood nest and completes it within about five days with little help from her partner. In the phase, the female is now well. The Blackcap is the most widespread warbler in Central Europe, the population of which is stable and even shows a slightly positive trend, contrary to the general trend of decreasing bird species and numbers of individuals. In Montenegro we had otherwise only seen the Blackcap briefly on Mount Rumija in the Dinaric Mountains. Here in the Biogradska Gora National Park, however, this Sylvia-warbler seems to be quite common. In any case, their singing can be heard at irregular intervals practically everywhere.

In addition to its habitat, which is not uncommon in our country, and the relatively short migration distance it can be covered, it is very versatile in several respects, including its nest location. When looking for a suitable nesting site, the Blackcap is not very picky and fixed. The nest is usually not far above the ground in dense vegetation. This can be in nettles, blackberries, bird cherries or even dense spruces. The nest is a loosely built round bowl made of small stems, grass and roots. Laying begins in Germany around the end of April or beginning of May, but can vary greatly depending on the weather. The fact that the Blackcaps are obviously in the same stage of breeding in Biogradska Gora NP can be explained by the altitude, which is about 1,150m above sea level, despite the much more southern location compared to Central Europe.

A little later the male Blackcap arrives, who can also be lured by playing his song.

The water splashes from the mountains down into the Biogradsko Jezero, not very spectacularly. But at least. The river here almost reminds me of the Wupper in the Bergisches Land, parts of which are also very natural. Finally a river in Montenegro that isn’t littered with plastic scraps. A breakfast break with the pancakes we bought yesterday at dinner rounds off the mood. We sit down next to the bridge that leads over the tributary to the lake. From here you are halfway around the well-known lake in Biogradska Gora; from here it is another 1.7 km to the NP info.