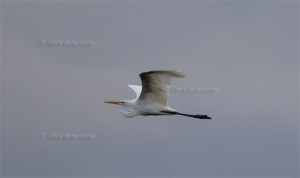 I was excited to see all the animals that would show up during our boat trip in the Pantanal. Maybe a Giant Otter (Pteronura brasiliensis)? And what about Jabirus (Jabiru mycteria) or a Pied Lapwing (Vanellus cayanus) or/and other birds? To cut to the chase: I was able to see them all and photograph many as well.

One bird family that I encounter frequently on these and the following days in the Pantanal is the family of kingfishers. Quietly, a Ringed Kingfisher (Megaceryle torquata) stands on a branch above a side arm. Slowly the boat glides up. The bird, however, is so intent on watching its prey that it pays no attention to the boatman and me.

Soon we had a close encounter with a Boat-billed Heron (Cochlearius cochlearia). The juvenile stands just above the waterline in a dense riparian bush. Another bird we encounter at the beginning of the boat trip is a Capped Heron (Pilherodius pileatus). In general, we observe many birds of this bird family. Finally we leave the fazenda behind us and follow the course of the river. During the next two hours we can admire the natural beauty of the Pantanal from the boat. Large cloud formations on one side and a darkened sky on the other reminded us to watch the weather carefully during the boat ride. At some moments, the colors of the Pantanal just take my breath away.

Quickly we see some more birds on both sides of the river bank. Herons are really a very dominant bird family in the Pantanal. So we also discover a Great Egret (Ardea alba). We also see several individuals sitting on tree tops during our boat ride.

Since rain is in the air, we are finally surrounded by several rainbows. Nevertheless, there are still some herons to be seen, such as a Cocoi Heron (Ardea cocoi), which was apparently pursued by some cormorants. Some Neotropic Cormorants (Phalacrocorax brasilianus) find a resting place on some dead trees nearby. Then, fishing Neotropic Cormorants appear as well. We observed quite a few herons, egrets and cormorants in the treetops. In the last sun just above the waterline in a dense riparian bush stands a reddish Rufescent Tiger-Heron (Tigrisoma lineatum). When approaching the bird flies away. A little later a Little Woodpecker (Veniliornis passerinus) hammers eagerly on a mangrove root. I almost can’t decide whether to take the one or the other bird. My boat leader means that in the morning at 6:00 o’clock, if it is still to some extent cool and the sun did not rise yet, a completely wonderful tendency on the river prevails. Sometimes there are even fogs over the surface of the water, but they dissolve quickly.

But now it is late afternoon. It is quickly getting dark and we have to start our way back. And again we are accompanied by a beautiful rainbow in the background.

A good starting point for a boat trip on the Rio Pixaim is the Fazenda Tereza. This is located just on the shore of the bird-rich Rio Pixaim. The 3 kilometer long and very bumpy turnoff to the lodge is at kilometer 63 on the Transpantaneira, just past the Mato Grosso Hotel. This accommodation is still signposted as Fazenda Tereza. Recently, however, it is called Southwild Pantanal Lodge.