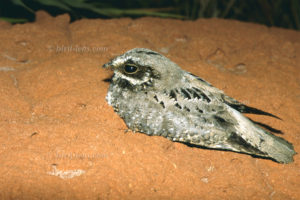 Forest fires are generally described in the media as crises or disasters. No wonder, when material assets are to be saved with many hundreds of firefighters in action. As macabre as it may seem, fire is essential for some birds to continue living in their native habitat. One such bird is the White-winged Nightjar (Caprimulgus candicans), which is found in burned areas of savanna on the plateau in the state of Goias in Brazil. This Nightjar is a resident of the open savannas of central South America.

The White-winged Nightjar is a rare, little known and threatened species. And it is a long time cause of taxonomic discussions and can also be found under the generic names Eleothreptus candicans and Hydropsalis candicans. The White-winged Nightjar can be found in the same genus as the Sickle-winged Nightjar (Eleothreptus anomalus) which I found in the Argentina in the Parque Nacional el Palmar. Like all nightjars, both species are cryptically patterned. There plumages are dominated by shades of gray and brown. As the Sickle-winged Nightjar the White-winged Nightjar is a relatively small, strikingly large-headed and short-tailed nightjar with pale, cinnamon-colored plumage. The male are remarkable in their wing structure and shape. Similar characteristics these nightjars share, are a pale, cinnamon-colored plumage, outer tail feathers that curve slightly inward, a short tail, and a broad bill surrounded by long bristles. Identification problems tend not to occur with the White-winged Nightjar. Above all, male White-winged Nightjars can be easily distinguished by the extensive white in the wings and tail of of the adult male. This is distinctive and is impressively displayed during courtship flights in small courtship arenas during the breeding season. This impressive visual display is largely at the expense of vocal communication. Unlike other members of the family, this species does not exhibit the long-distance calls typical of many other night birds. Instead, the male produces a muffled mechanical sound during courtship flights. In contrast to the bright male, the female lacks white markings in her plumage. Moreover, the female superficially closely resembles the female Sickle-winged Nightjar.

Scientists had found a male White-winged Nightjar in November 1997 in Emas National Park, Goiás State. The specimen was located on a termite mound in a recently burned area with dry vegetation. It was additionally noted that this nightjar seemed to specialize in burned areas. One explanation is that as burned vegetation regenerates, a high abundance of insects sets in. Scientists therefore recommend controlled burns to benefit not only the White-winged Nightjar, but also populations of other animals in the savanna habitat of Das Emas National Park. Like other nightjars, the White-winged Nightjar flies at dusk and throughout the night. It flies slowly, often gliding one to two feet above the grass in search of moths, beetles, and flies. The White-winged Nightjar is often found on termite mounds, from which it makes sudden short excursions from these waiting to snatch prey from the air.

Bird-lens is first and foremost a website designed to meet the growing demand for high quality photographs of the birds of the Western Palearctic. In order to satisfy the demand for top-quality photographs of rare bird species, Bird-Lens.com has also made targeted trips to distant places such as Asia, Africa and South America. All this in order to be able to take excellent photos of birds. The yield of images not only of rare Western Palearctic birds is very good. This rare image of the blog is only a first impression, what you can find in behind the tab “Picture-Shop” very soon. Just leave a message if bird-lens.com can serve with a picture.